You should spend about 20 minutes on this task. The bar chart below gives information about the number of students studying Computer Science at a UK university between 2010 and 2012. Summarise the information by selecting and reporting the main features, and make comparisons where relevant. 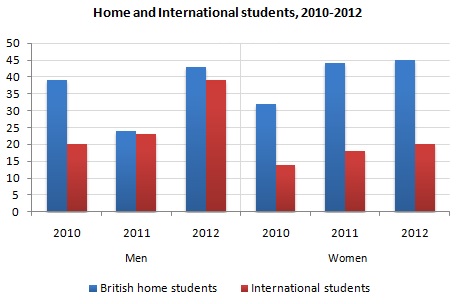 The bar graph indicates the differences in the figure for students learning Computer Science at a Britain university for two years.

According to the data, the main trend was that the number of all kinds of pupils increased steadily with the exception of that of British home students.

To sum up, it is seen that the number of only British local students did not increase continuously.