IELTS Report 14 – Map – Changes in the Town of Kimsville

The maps below show recent changes in the town of Kimsville.

Summarize the information by selecting and reporting the main features, and make comparisons where relevant. 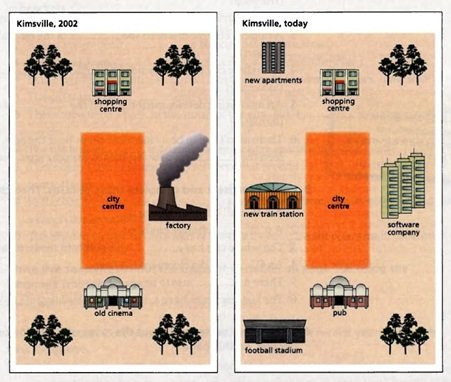 The two maps illustrate some changes which have taken place in Kimsville town between 2002 and today. Overall, it can be clearly seen that the town of Kimsville was greener, with lots of trees, but today, many new projects have been added to the city.

Looking at the maps in more details, the trees on both the North West and the south west sides of Kimsville have been cut down and new apartments and a football stadium have been built on their locations respectively. The factory to the right of the city centre has been knocked down to make way for a software company.

Moreover, the building that used to be an old cinema in 2002 has been converted to a pub. In addition, anew train station has been constructed to the west of the city centre. However, the shopping centre in the north of the town has remained the same with no changes.