The two maps below show an island, before and after the construction of some tourist facilities. 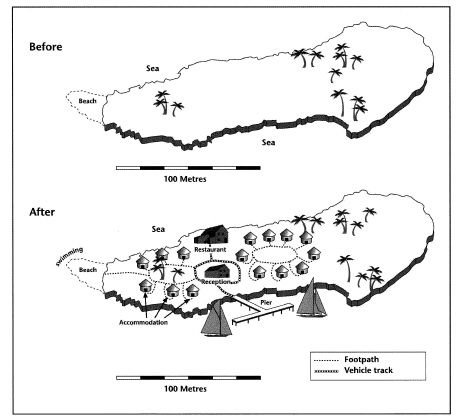 The first map provides information about an island before the construction of facilities for the purpose of serving the tourists while the second map illustrates the changes that took place in the same island after the development of the aforementioned facilities.

Two groups of accommodation units are built in the middle two thirds of the island while the West most part of the island is left as a green area with its trees. On the other side, the East most area is used as a beach which can be accessed from the housing units by a footpath.

The two groups of accommodation units are separated by a restaurant and a reception which are connected to each other and to a pier by a vehicle track. From the pier, tourists can reach ships docked at the sea, near the island.