How OET speaking can improve the paramedical career?

How OET speaking can improve the paramedical career?

The essence of OET is hard to describe in the modern world of nursing and medicine. It is important to enhance speaking skills in English if you want to work in developed countries. UK and Australia have stringent norms related to OET test. In order to prepare for the registration, you should use sample audio files as they play an important role in practicing spoken English for achieving success in OET. Prior to preparing for the test, it is vital to understand the intricate details. Here is in-depth info on the same.

OET test is divided into two mutually exclusive role plays. They are integral parts of the speaking exercise as the conversation is between the medical professional and the patients or the caregiver. In fact, sample ensures the simulation of real world scenario and go a long way in honing the skills of the prospective nurses. The OET test on speaking takes about 15 minutes of time duration and requires higher degree of expertise from the individuals.

Warm up conversation initiates the first section of the speaking examination. The interlocutor or the patient may be the conversation colleague for short time duration. OET is not designed to assess the performance, instead, the provided sample makes the people feel at ease. During the start of the test, the voice may explain the functionality and the objective of the sample section. The given answers would reflect the marks of the candidates in OET test.

After the warming up questions as show in the sample, candidates are given a scenario to showcase their skill sets in the examination. It is quite similar to the real-life scenario of a medical professional. OET test simulates similar environment wherein a patient is asking advice from the nurse, doctor, physiotherapist, dentist or the concerned medical professional.

Armed with role play card in the speaking session, you would be given 2 to 3 minutes to prepare. Candidates can consult the topic with their role play partner prior to the start of the OET test, but the interlocutor is not obliged to explain. However, the test taker can write important points on the card. The role play of the English speaking test would continue for about 5 minutes and the process is repeated again. The entire conversation is recorded and sent to the examination center for evaluation. The examiners listen to the recording and award a grade based on various parameters.

Structure of the Section

Sample is structured to examine the verbal competency. Warming up during speaking session is essential to get the best performance from the candidates. Chatting with the interlocutor during OET helps the candidates to strike a rapport early on.

Speaking test under OET tests the following skills in detail:

Candidate successfully clearing the sample test should be able to initiate the conversation in an easy and hassle free manner. The Speaking analysis also focuses on how well the person maintains the conversation and is able to communicate effectively. In addition, examiners also keenly observe the usage of the medical terms during the OET test. It is important for the professionals to use information provide during the speaking session. They also assess the capability of the candidates in wrapping up the topic in 5 minutes. 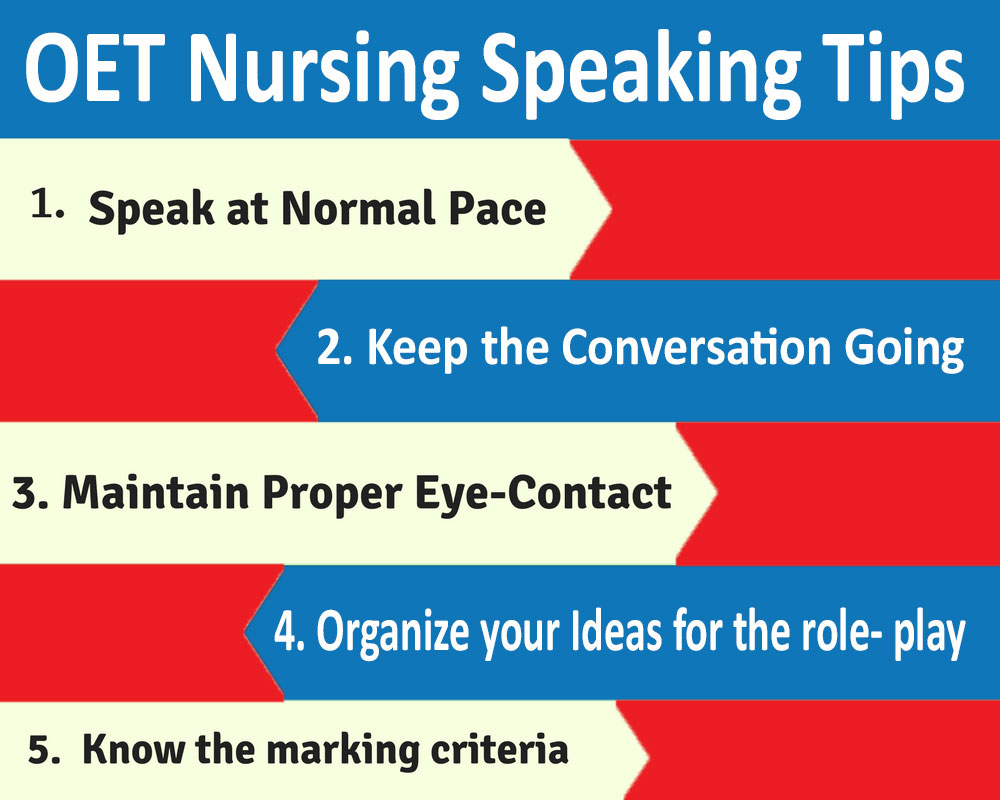 While speaking, the speaker is tested for pronunciation, rhythm and stress of the phonetics. In addition, OET test also determines the required intonation, pitch and accent. In fact, the international paramedical staff should speak language that is understood by the patients. Practicing the sample role play day in and day out could do a world of good to the candidates. With continuous preparation, they can clear the Speaking test with excellence.

OET examines the fluency of the language or in other words, it analyses how well you are speaking the language with minimum effort. Sample is inundated with numerous role plays and they are not cooked up scenarios but real ones that are crucial to success in OET test. In order to pass the speaking session, it is important not to use fillers. Candidate should also avoid restarting of sentences while executing role play under OET category.

Tone is the key

The test determines the speaking capacity of the candidate by closely monitoring the tone and the type of language used. It is important for the nurses to speak professionally while appearing for the examination. Paraphrasing is the key to get good grate and it can only be accomplished when you are ready to appear in the OET. Since the conversation scenario is different, the nurses need to adopt the speaking style accordingly. For instance, in a role play with complicated situation, medical professionals are advised to assuage the patient, hence, the tone while speaking should not be raised.

The test evaluates the understanding of the grammar in detail. The speaking session marks ratings according to the sentence structure of the conversation. If your grammar and vocabulary exceed the expectations, it is possible to clear the hurdle with flying colors. Moreover, the examiners of test also take into account the complexity and accuracy of the language.

How to be successful in speaking test?

Here are some important tips to help you succeed in the test.

If you are preparing for the examination in the right manner, it is possible to gain the license to work in the leading hospitals of the world. All these effective tips would be helpful in fulfilling your aspiration.

3 thoughts on “How OET speaking can improve the paramedical career?”