The Top Common Mistakes in the PTE Academic: Learn them & Stop Making Them!

Everybody makes mistakes. Fact. And everybody makes mistakes in tests. Fact. Even the best English language learners with loads of revision and practice under their belt will make mistakes in the PTE test. Fact. So don’t beat yourself up about making errors. Tests are stressful situations where it is easy to slip-up. What you can do, though, is try to minimise your mistakes and to develop an awareness of the types of mistakes that candidates frequently make.

As language coaches, here at Benchmark Education, we have the inside information you need about the mistakes that commonly occur. The great thing is that several of these common mistakes that bring down the overall PTE score can be easily avoided. They are not always a reflection of poor English proficiency. They may be concentration issues, problems associated with exam technique or just bad habits that you have got into without realizing.

We will look at each section of the PTE in turn and provide a comprehensive list of mistakes that we see VERY often. As you read through the lists, why not have a think about your own performance in your practice tests and questions and identify those errors that you think you have made or would be likely to make yourself. Make a note of these areas and you will know which mistakes to focus on in your practice tests so that you make sure that they don’t happen on test day. 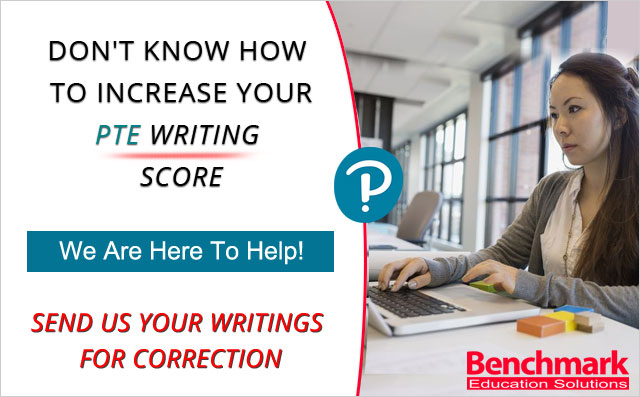 The Speaking Section
– Lack of intonation and tone
– Speaking overly fast or slowly
– Speaking overly loudly or quietly
– Pausing too often and for too long
– Filling pauses with sounds like um, er or words such as like or and
– Grammatical errors such as tense, article use and verb agreement
– Forgetting to pause for punctuation
– Self-correcting
– Repetition
– Starting to speak before the tone

Do any of these mistakes sound familiar? Be honest with yourself. The fact that they are listed as the most common mistakes shows how natural it is to make these mistakes in a second language test and these errors are often made in the PTE test. Work on those that you know you make when you are practicing and see if you can start to make less of them over time. After some revision and by addressing the errors that you identified, have another look at the list of mistakes again. Hopefully you will have chalked some off your list each time and by test day, you’ll know which mistakes to watch out for!

Can a Computer Really Mark My PTE Test?

PTE Speaking Tasks: My Spoken English Is Good So Why Am I Not Making The Grade?