The graphs below give information about computer ownership as a percentage of the population between 2002 and 2010, and by level of education for the years 2002 and 2010. 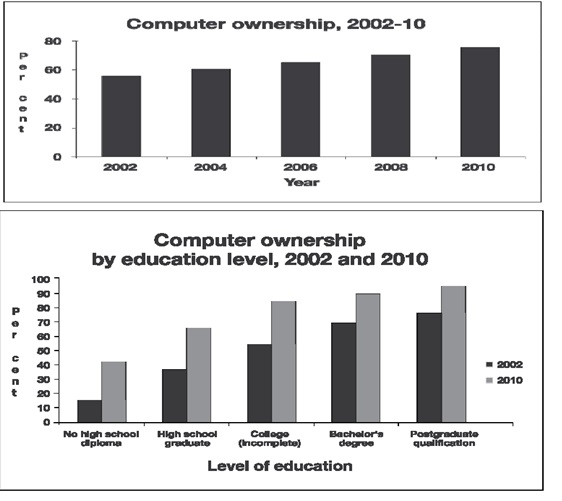 The bar charts illustrate how much of the population owned computers and how computer ownership was distributed according to educational levels from 2002 to 2010.

It is obvious that there was a steady upward trend in the number of computer users during the period. Also, people with higher levels of education were more likely to have their own computers.

In 2002, there was 55% of the population using computers. The proportion increased by 5% after every two years until it reached 75% at the end of the period.

On the other hand, people without any high school diploma were consistently the least likely population to have computers, with the percentages of 15% and 40% in 2002 and 2010 respectively. In contrast, the figures for post graduates came to the first place in both years (75% and 95%). Bachelor graduates and college undergraduates were the second and the third widest communities of computer consumption, while the number of high school graduates owning computers accounted for 65% in 2010, rising by 30% from the figure in 2002.